A short time ago I built a "portable"gaming table. Okay, portable is a bit of a stretch, but a decent sturdy table. Then a few days later I noticed two smaller tables I was gifted from a local brick and mortar gaming store closing. Holy unnecessary construction Batman! The stand for the larger table didn't fit through my back patio door and I had to haul it around the long way. Add to that the raised edge on the table prevented the terrain cloth form laying flat, so the smaller tables supported on plastic folding tables was they way it went this time. The previous game was just Martin and I, but more recently Jonathan joined us for some Alpha Strike in the outdoors. Alpha Strike is a larger battle version of Battletech. 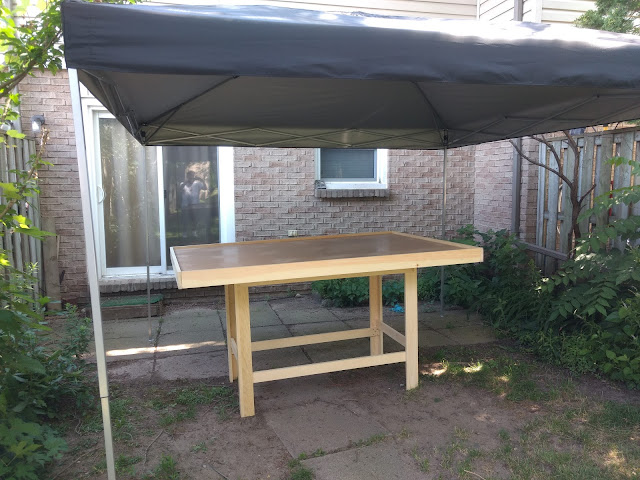 The first setup with large table. The cover prevents the tree from dropping crap on us. 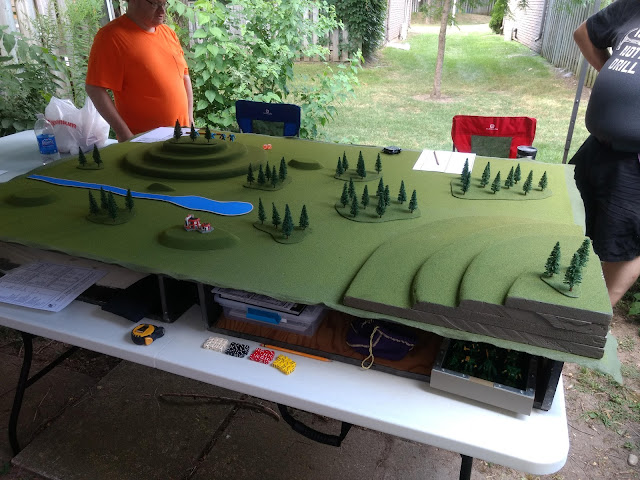 The refined layout with Jonathan and Martin. Much better, and easier to move.
Posted by pulcherius at 1:51 pm No comments:

Email ThisBlogThis!Share to TwitterShare to FacebookShare to Pinterest
Labels: war-gaming

Sorry About The Wait

I have been absent for quite some time. Not entirely by choice. I had a mental health issues that necessitated an absence from being online. But after this delay I am moving on. I apologize for the inconvenience.

My computer hard drive crashed and as of this writing it looks like all my data is gone. I have a few really old backups but nothing recent. This has given me cause to reexamine my gaming habits. One of which is my hording. I have a lot of gaming stuff. Both physical copy and digital files. I use very little of it. I collect things like a mad man, thinking I might need it some day. Time to narrow the range of stuff I pursue. I will still follow and write about the great many games I like. However my personal collect will contract to include only the few games I want to play. This hobby is an important part of my life and I want to enjoy it more.
Posted by pulcherius at 12:24 pm 1 comment:

Email ThisBlogThis!Share to TwitterShare to FacebookShare to Pinterest
Labels: blogging

Jutland 100 years later, 100 ships later. This past Saturday The gang gathered to re-fight the Battle of Jutland in time for the centenary. After some extended set up time we managed to have over a hundred ships on the table. The rules were simple enough that we figured a 1:1 staging of the battle was possible. At the last minute we excluded some minor ships. Grand Admiral by Majestic 12 games is a bare bones hex based rules set. There were some minor hitches with the rules but with some tweaking they are usable for big battles. The British fleet got lucky on the draw sinking some of the German BBs for an exchange of some lighter ships. We called it at that point as time was running out.
Posted by pulcherius at 4:23 pm No comments:

In Praise of Simplicity

About a month ago down at the library Martin and I play tested a set of rules that I downloaded and printed out recently. Called Panzer War, they are a free set of quite detailed but still I think playable skirmish rules. How we ended up play testing this set of rules is a bit of a funny story. Originally it started out as a quest to find a decent set of modern period micro armour rules, as I'm dissatisfied with the ones I have so far. I downloaded and read a few sets of rules but could never find anything that really clicked with me. So I went back through my list of files and some of the older games that I have downloaded a while ago and took another look. Remembering that I had a set of rules called AirLand War I took a look at them again. AirLand War is actually an expansion to Panzer War. So with the rationale that I should try the basic game first before the expansion set I suggested we try Panzer war to Martin. But owing to the complexity of the rules, with such factors as vehicle angle and turned rotation speed we decided that it would be best to try it out in 15 mm first. So there you have it they went from modern micro armor to 15 mm, so does that make sense?

The result? Well let's just say things didn't work out exactly as we planned. For a more detailed after action report I direct you to another club member my friend John and his blog The Minstrel Boy. But I can summarize here, the game went very slow and owing to the long range of weapons (we were not using the recommended ranges for that scale) it ended rather quick. I think perhaps there was too much on the table and perhaps not enough scenery. Although the tank combat results where more "realistic" I don't think the extra detail really added much to the game. And so it occurred to me that if the extra detail didn't add to the enjoyment of the game why bother with it? Martin imparted a wonderful piece of wisdom to me recently about gaming whereby he explained to me the difference between modeling the process and modeling the results. Or to put it quite simply how it happens versus what happens. I realized there was more interested in what happened then exactly how it happened. The house were still somewhat important and should be modeled realistically towards expectations but the process should not bogged down the flow of the game. The Panzer War experiment certainly ran counter to my personal trend of moving toward simpler systems. I have already switched to far simpler games in other genres. For instance instead of Full Thrust, which is a terrific system don't get me wrong, I now play Sunder The Stars. And instead of Dirtside I will try Laserstorm, by Nordic Weasel Games. In these two examples it's mainly because I want to spend more time playing a battle then designing units for it. Specifically in the case of Full Thrust I've seen battles lost or one in the design phase rather than on the table, and that was before the plethora of options opened up in the newer unofficial supplement Project Continuum which is over 150 pages long. My main goal with gaming is to get figs on the table, push them around and roll dice. And simpler games serve this purpose well. It will only be a balance between simplicity and detail. As too much of one and not enough the other can spoil your enjoyment of a game.

After purchasing the PDF of Laserstorm I splurged and bought PDFs of FiveCore the generic skirmish game and Five Men at Kursk their more detailed will work to skirmish rules. As well as some expansions and add on modules. So I'll be giving the FiveCore System some testing in the future. How it goes, I will keep you posted.

So yeah, a longer post and it's about gaming, yeah me.
Posted by pulcherius at 11:51 am No comments:

Email ThisBlogThis!Share to TwitterShare to FacebookShare to Pinterest
Labels: war-gaming

Sir Douglas Haig inspected the battalion at work, and told our Commanding Officer Major Bowen- that he had "a devilish fine fine battalion". At night "The Merry Mauves", our divisional troupe, give a fine concert in the open air, which we all enjoyed immensely.
Posted by pulcherius at 10:39 am No comments:

Laid out the line to the different companies and Orderly room. The weather improves and "The Caravan" looks finer than ever.
Posted by pulcherius at 11:49 pm No comments:

Out on our ordinary parades, visual, etc. the scenery around her bivouac was fine. We were on top of the hill, and had a fine view of the surrounding country, which would be hard to beat. Nature was in all its glory, and the birds served as an ideal alarm clock, as they had us weakened every morning at 5 AM. The rustling of the trees in the fresh country smile was like medicine to us after the sickening roar of the guns. We have improved our bivouac by making steps up to it, and laying in some foodstuffs. The weather still continues drizzly.

Just received news that the Battalion that relieved us got a desperate cutting up, having over 200 casualties. Truly Gordon Castle is a hotshot, and still one sees in the press "all calm on the Western front". Yes all calm to the general public, but to those behind-the-scenes, how calm? But `twas ever so, and this is why Tommy is such a happy-go-lucky character. Taking things as he finds them, and making the best of them. The sarcasm of the average British Tommy is amusing, and it is a mistake to ask them any questions. At least that's my idea, as I was "had" to often. On one occasion I saw two chaps carrying a Dixie, the soldiers kettle. Of course I asked them "was that the tea up?" One of them replied "no it's a new latrine bucket". On another occasion, during short rations, I saw chap with a very small piece of bacon. I asked him "was that for his breakfast?" And he replied "not at all it's to clean my boots with". Such is the spirit of the British Army.

In the afternoon we paraded to Acheux, a fairly decent sized town, for our usual lightning bath on coming out of the trenches still raining very hard, but "The Caravan" is still sticking it A1.
Posted by pulcherius at 2:09 pm 1 comment: